The heart of the NAVATARS concept of operations is the deployment of accredited vessels and air assets in service as an auxiliary "virtual navy" or Micronesian Coast Guard in support of subscribing Pacific Island governments. Building on the successes and experiences of the Australian Pacific Patrol Boat Program and the United States Coast Guard's joint "shiprider" naval patrols with Pacific Island governments, NAVATARS vessels will embark host country law enforcement officers on patrols of their countries' Exclusive Economic Zones (EEZs).  NAVATARS' trained maritime security professionals will then assist these police in the performance of their duties -- especially those of border surveillance and asset recovery -- in order to help curb the exploitation of Pacific Island EEZs by organized international criminal elements.

NAVATARS authority derives from the host country law enforcement officer, who, in cooperation with the NAVATARS vessel master, exercise full discretion in the conduct of operations.  With the consent of participating governments, NAVATARS' operations will span multiple EEZs, sometimes in the course of a single extended patrol. This tactic will defeat the current practice of poachers, which is to evade law enforcement by slipping across contiguous EEZs or into high sea pockets between EEZs.

NAVATARS will sustain itself through international donations and a percentage of the new revenue it brings to subscribing governments.  NAVATARS patrolling will build the capacity and protect the state sovereignty of vulnerable Pacific Island countries, while reducing the incentive to international organized crime syndicates of using the Pacific for the transhipment of people, narcotics and weapons.  NAVATARS will also help to curb illegal dumping and other potentially costly environmental crimes.  Most importantly, NAVATARS patrolling will help to reduce the rampant theft and destruction of Pacific marine resources by illegal, unreported and unregulated fishing, increasing the viability and long-term sustainability of the fishing stocks upon which so many Pacific economies and livelihoods depend. 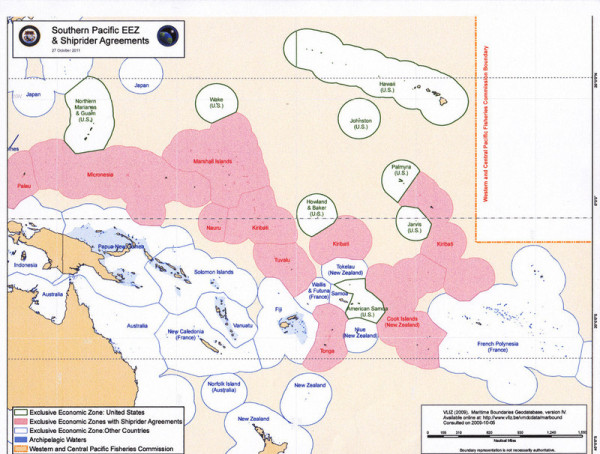 Chairman's Corner: The Ocean Unites Us

Convention on the Conservation of Migratory Species - COP 12

Plan to Save Bluefin Emerges from Busan Meeting

Time for a Moratorium on Bluefin

Print | Sitemap
© Partnership for the Environmental Protection of the Pacific
Login